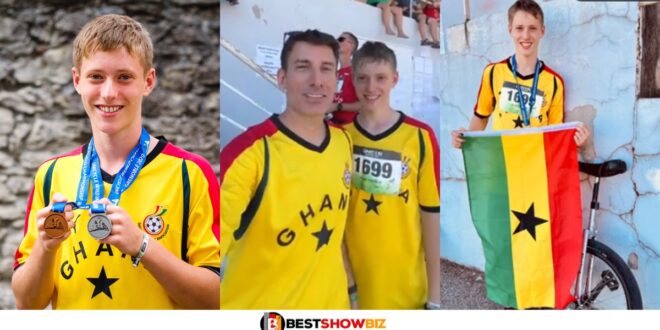 White boy who lives in Ghana wins the country’s first Unicycling medal. He came 3rd and 2nd place for Ghana in the world championship

The internet has been buzzing since an American photographer stationed in mamprugu named William Haun tweeted that his son, Trey Roger Haun II, has won two medals for Ghana at the Unicycling World Championships. These medals are the first ever earned by the country.

Trey took home a silver medal in the 15-16-year-old boys’ 30m Wheel Walk Race and a bronze medal in the 50m One-Wheel Race.

As people in Ghana began to show a lot of interest in his story, William expanded on some of the things he had previously provided on Twitter.

He also released another video in which he spoke Mampruli in order to ensure that the people living in the village of mamprugu were aware of the positive developments.

Read Also  Voice Notes: Bobrisky drops chats with Mompha after he claimed they are not friends

Heidi Haun’s acceptance of a position as a general surgeon at the Baptist Medical Centre (BMC) in October 2014 brought William Haun and his wife to Ghana, where they have been residing ever since.

The couple and their two children, Trey and KJ, went back to Ghana to serve as full-time missionaries for the International Mission Board (IMB).

The ministry, which has its headquarters in Naraligu, encompasses a wide range of activities, including but not limited to medical treatment, the coordination of volunteer efforts, pastoral ministry, discipleship, and personal evangelism.

Their top objective is to spread the good news about Jesus Christ to the people who live in northern Ghana.

When Heidi decided to participate in the medical receptorship program offered by IMB, she was in her fourth and final year of medical school at the University of South Florida (USF).

Between October 2007 and January 2008, the program covered all of Heidi’s costs so that she may volunteer at any overseas Baptist hospital for a period of two months or longer.

Read Also  Girl Strips Naked: Shows Off Her 'Goodies' As She Is Bored Of Lockdown - Video

Heidi made the decision to move to Nalerigu so that she could spend the next three months working at the Baptist Medical Clinic. Her time spent there qualified as a rotation in international studies at USF.

Trey, aka “Cutest Baby in the US of A,” went to Ghana to try and claim the international title by checking out the competition overseas. He primarily served as “morale booster” for his parents when they were tired of the heat and long work hours.”

William took advantage of the trip to provide assistance with computers to the medical staff and patients in Nalerigu.

In addition to that, he spent the same amount of time traveling over West Africa doing media coverage for IMB.

The fact that Trey is bringing these medals home from Unicon should be a source of pride for Ghana today. William Haun stated the following in a message on Twitter:

“We live in Nalerigu and will be giving the medals to Naa Bhagu Abdulai Mahami Sherifa, Overlord of Mamprugu.”

It was he who bestowed upon me the title of “Sulimiisina’akyinaaba” and bestowed the name “Manboora” onto my son.

The largest gathering of unicyclists takes place during the UNICON, which gets its name from the words “UNIcycle CONvention.”

Each time, there are between 1500 and 2000 participants who come for a total of a week and a half.

The UNICON will be held for the very first time in its history from the 26th of July through the 6th of August 2022 in Grenoble, France, which is located in the very center of the Alps.