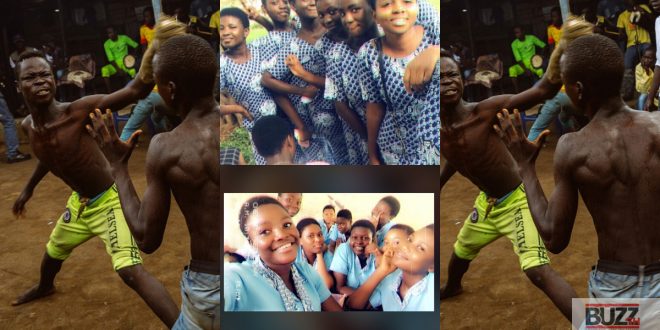 Two men arrested for fighting over SHS girl in Koforidua.

Two gentlemen engaged in a serious fight which had one arrested and the other in the hospital for severe injuries all in the name of Love.

21-year-old student named Enoch Odonkor and Philip Ahiable, both have been dating the same girl, a student of Ghana Senior High school Koforidua.

By the reports given, the victim Philip Ahiable called the accused person Enock Odonkor on phone to rain insult and warned him to stay away from the girl.

Enoch did not heed to the advice but visited the girl at Asokore Kuma, a suburb community of New Juaben North Municipality on twice occasions which Philip got to know about.

Philp confronted Enock on one of the visits and a fight happened between them.

Enoch who already knew a confrontation was possible due to the warnings he had received on phone, was armed with a paper cutter which he did not hesitate to use to slice the face of Philip.

Philip Ahiable was rushed to the Eastern Regional Hospital and Enoch Odonkor was arrested for causing damage to the face of the victim.

The Prosecutor, Chief Inspector Owusu Ababio prayed the Court to remand the accused to enable Police to take a statement from the victim from his Hospital bed. The Court granted the request by the prosecution and adjourned the case to May 8, 2020.