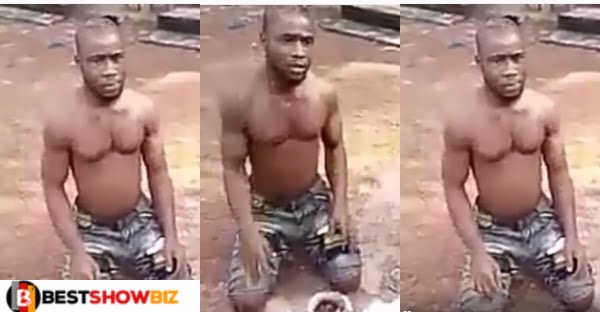 Sakawa Boy reveals what they use women’s juice after s3x to do. (video)

Two young males who participate in cyber fraud (known as sakawa and yahoo in Ghana and Nigeria, respectively) have been caught in Imo State by members of the Hunters Association of Nigeria.

The two suspects, Ebuka and Chinonso Ikediobi, explained to their captors their method of operation and how they exploit women’s private parts to increase the power of their money charms.

‘The native doctor who produced the charm ordered us to use a handkerchief or a piece of towel to gather semen from the private portion of every girl we made love to,’ they said. He told us to place the handkerchief or towel with the sperm in the kettle and burn it after each collection.

He informed us that the number of girls we sleep with and the amount of sperm we collect will decide the amount of money we receive.”

When requested to provide the name and whereabouts of the native doctor, they stated, “We were strongly told not to give it to anyone, that if we did, we would die.”

Both were tortured before being turned over to security officials for additional investigation.