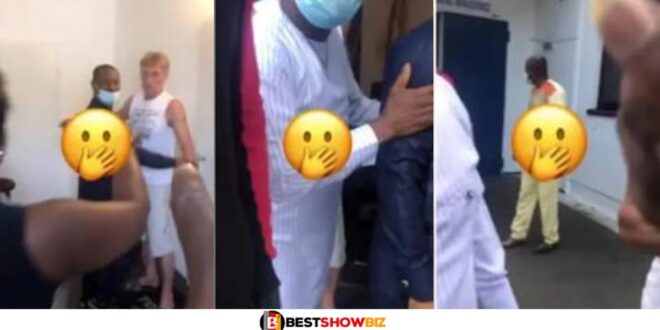 A Ghanaian pastor who became involved in a humiliating case of adultery has embarrassed both himself and his congregation.

The pastor, whose name is still unknown, serves as the local pastor of the German branch of Faith Pentecostal Ministries.

According to a trending video on social media, the pastor can be seen attempting to prevent a potential conflict.

The preacher dodges a man who is allegedly angry because the accused pastor had sex with his wife.

The victimized person took his phone and filmed what happened following the awful occurrence in anguish.

In the footage, two people can be seen attempting to conceal the pastor as he hides in a room with the name of the church written on the wall.

The angry man who was pursuing the pastor demanded to know why he was protected, but when he heard the insulting remarks, he became furious.

The man responds angrily, denouncing the pastor and branding the entire church organization as a fraud.