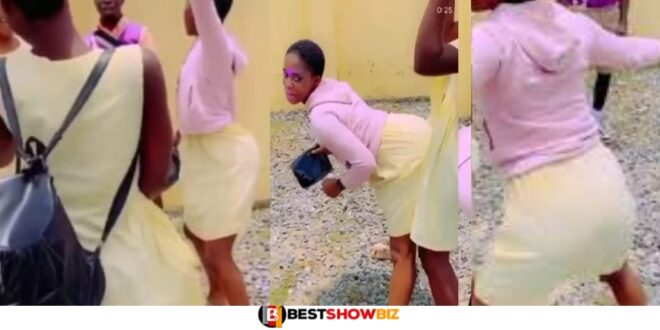 In one of the viral videos, a group of SHS girls were seen twerking and performing some sexy acts instead of praying to God to help them pass their exams.

These SHS students have been given a golden opportunity to attend high school for free, but instead of thanking the hand that fed them and provided them with such an opportunity, they are twerking merely because they have graduated from high school.

Watch the viral video below;

A young lady has expressed her concern after her gateman declares his undying love for her with a detailed analysis of his feelings.

Temitope Akinrimisi, a Twitter user, took to the platform to share screenshots of her chat with her gateman, who is in love with her.

As part of the conversation, the young lady had a second thought about her safety on the premises as a result of the security guard’s distraction.

”My gate man legit told me he has feelings for me. I don’t even feel safe anymore😭😭,” she wrote in a tweet.

My gate man legit told me he has feelings for me. I don’t even feel safe anymore😭😭 pic.twitter.com/THK0KTGarN