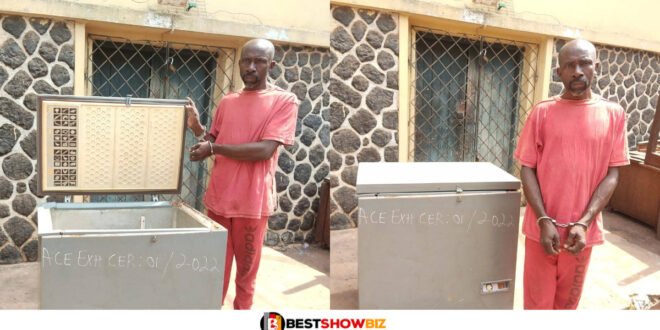 Man arrested for k!lling his 3 kids and throwing their bodies into a freezer

According to a preliminary inquiry, the suspect’s wife, the children’s mother, walked to the market with her only child, a boy, leaving the other children in the suspect’s care. She returned in the evening of the indicated day, however, and found none of the three children.

During the hunt for them, the suspect called her attention to the stated fridge, which he had carried home from his business on January 2nd and put on their apartment’s porch. Closer inspection revealed that the children’s lifeless corpses were found in the fridge with bruises, implying that they had been murdered and placed in the fridge.

The state police command’s spokesperson, DSP Daniel Ndukwe, confirmed the occurrence to reporters, saying the children’s lifeless corpses were immediately brought to the hospital, where they were verified dead by medical personnel on duty, and put in the morgue for preservation and autopsy.

While expressing condolences to the mother of the deceased children, Ndukwe stated that the state Commissioner of Police, CP Abubakar Lawal, has assured him that the police will properly investigate the issue and ensure that justice is served.