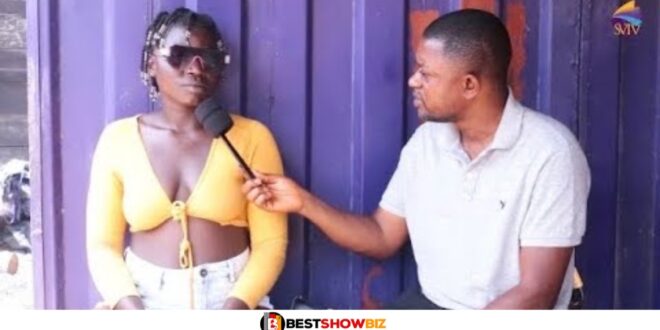 “I started with weed toffee. I felt sexually aroused whenever I took it. It was very nice”-22 years old girl reveals

Gifty Osei, a 22-year-old stripper, has stated that she abandoned her dream of becoming a nurse because she realized it would be of no benefit to her.

Gifty, also known as Ohemaa Baddest, stated that enrolling in a training college required her to give up her smoking habit. In her decision to fully embrace her ‘new path.’ Ohemaa abandoned her dream.

“l completed SHS in 2014. That was when I realised that the street was fun, so I decided to put school aside. I wanted to be a nurse.

Later, I figured that it wouldn’t help me. I was smoking and already engaged in things I wasn’t supposed to. So it meant that I had to put everything aside if I got admission,” she disclosed.

Ohemaa revealed in an interview with DJ Nyaami on Ghetto Life Story that she began smoking in senior high school. Gifty also shared her experience as a stripper and sex worker.

“I started with weed toffee. I felt sexually aroused whenever I took it. It was very nice. We had a ghetto behind my house in Nima. That was where I got it. I also took some to school for my friends to try,” Ohemaa said.

According to the stripper, she ran away from home soon after graduating from high school. She began stripping in clubs and hooking up there. Ohemaa claimed that she earns GHS1000 per client.