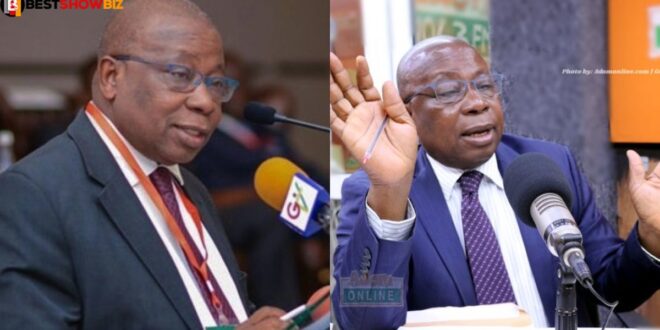 Ghanaians call for the sacking of health minister after he was caught in C()vid vacc!nes fraud

In the last several days, Ghana’s current Health Minister, Kwaku Agyemang Manu, has come under scrutiny for the saga surrounding the purchase of Sputnik Vaccines.

The health minister said there was no illegality in his acquisition of the Covid vaccination from the start, but rigorous investigations have revealed otherwise.

This became clear after an ad hoc committee established up by Parliament to investigate the procurement of Sputnik vaccinations discovered that the Health Minister had paid Messrs Al Maktoum 50% of the contract value.

The committee determined that the government paid $2,850,000 out of $5,700,000 in the disputed Sputnik vaccination agreement, despite the fact that the government’s representative claimed under oath before the ad hoc Committee that he was unaware of any payment.

Although the Sheikh had supplied the country with an initial 15,000 doses of Sputnik V vaccines on Wednesday, March 3, Mr. Agyeman-Manu told the parliamentary committee that “to the best of my knowledge, we haven’t done any payment.”

He explained that he was desperate to save Ghanaians from the covid-19 outbreak, so he entered into such an international arrangement without parliamentary and cabinet consent despite the Attorney- General’s prior warning.

“I was in a dire and helpless situation with the Covid numbers management. We had 78 deaths in February this year, and 56 deaths in March, and these were the numbers that compelled me to act.

“…if you were the Health Minister, I believe you would have made decisions that, in hindsight, you would not have made. Mr. Agyeman-Manu told the committee that the country was not in normal times.

“The Committee is of the opinion that even if the situation in the country at the time the Agreement was signed was that of an emergency, due process of law should have been followed because Parliament would have treated the issue with the urgency it deserved and appropriate action would have been taken accordingly,” the committee said. According to the House’s Standing Orders and procedures, the agreement would have been adopted under certificate of urgency.

Many people have called for Minister Kwaku Agyemang Manu’s dismissal and perhaps prosecution since then.

His dismissal has been trending on Twitter, with netizens claiming that the incumbent Health Minister is a threat to Ghana’s health security since he did not conduct due diligence in the vaccine acquisition.

Take a look at some of the responses below: