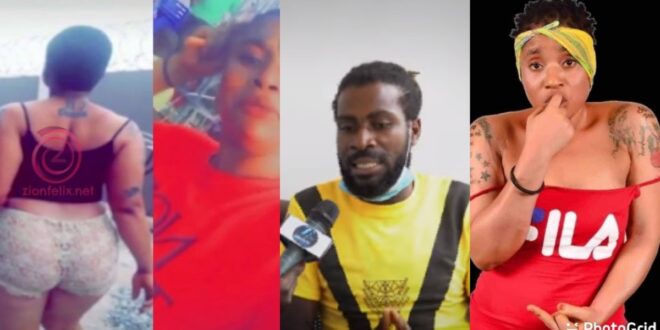 “Don’t blame me for the death of Ama Broni, she danced for $100”- Musician who invited her on stage speaks.

News went viral about the death of a young lady yesterday after it was reported that she was f!ngered whiles dancing at the carnival at Liberia Camp in the central region last night.

The musician who has been accused of causing the death of the young lady has spoken.

The name of the girl is Ama Bronii and the musician who invited her to dance is called Original Shana.

According to Original Shana, no one should blame the death of Ama Bronii on him because he offered $100 to anyone who could dance and remove her dross.

Ama Bronii came up the stage and danced to his song ‘yiwo dross’ in which he featured patapaa.

Shana added that he was shocked when the lady actually removed all her clothes including her panties and twerked to the song.

After that Shana said he held her to protect her from the crowd who wanted to f!nger her, she was dressed up and when she was walking backstage, she tripped, fell on a live wire and was electrocuted.

Original Shana said all this when he was speaking with zionfelix on his uncut show.