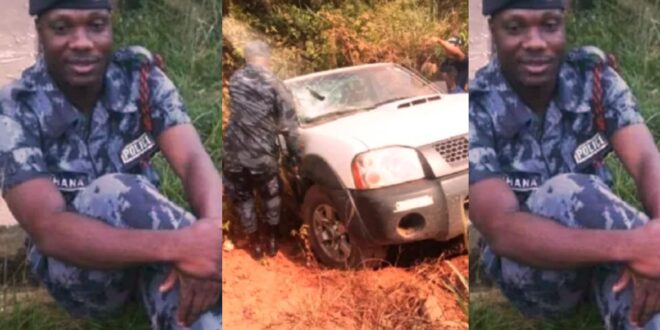 A notorious gang of armed robbers has reportedly attacked and killed a police officer who was guarding a bullion van on the Dunkwa-Obuasi Road.

from reports, the bullion van that was attacked by the armed robbers was that of the Ghana Commercial Bank (GCB).

it appears that the bullion van was heading to New Edubuase from Dunkwa.

reports from the Ghana police service reveals that the robbers were ten in number.

the armed robbers traped the van at Asokwa junction-Obuasi road and crossed the bullion van and started shooting at it until the gunshots killed the policeman who was guarding the bullion van (money car) according to a police report.

The robbers made away with GH 500,000 and the gun of the deceased police officer.

The deceased police man’s name has been reportedly given as Cpl. Baba Martin of the Dunwah police command.

May His Soul Rest In Peace!