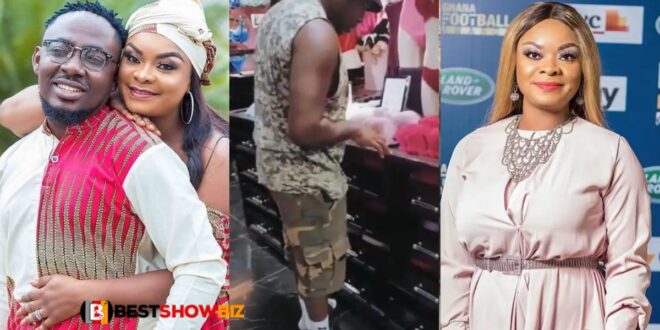 Choirmaster, a Ghanaian musician, has uploaded a video of himself shopping for underwear for his wife, Beverly Afaglo, days after her home was destroyed by fire.

The video, which was posted on Instagram, shows the former Eugene Kwadwo Boadu Baah strolling around a lingerie shop.

According to the video’s caption, he is buying some for his wife, who recently lost everything in a fire.

Afaglo’s house was destroyed by fire on Tuesday, August 10, 2021, as we reported earlier.

Afaglo disclosed after the tragic incident that the fire burned for four hours before being put out, but not before destroying everything inside the house, furthering that she did not even have pants to replace what she was wearing before the fire.