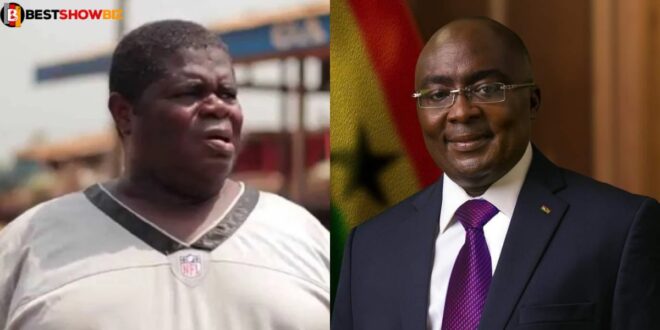 We’ve learned that Vice President Dr. Mahamudu Bawumia has gone to the rescue of Psalm Adjeteyfio, who is most known for his role in the television series Taxi Driver.

When asked about his rent situation in an interview, TT  stated that he needs a sum of GHC 3,000 to avoid being kicked out of his apartment.

He claimed that no matter what fame he got, he couldn’t build his own home.

Adding, “I don’t even have a place I could call my own; I’m a renter in a shared apartment,” he explained.

However, in a Facebook comment, lawyer Akbar Yussi Khomeini, who works in the Vice President’s office, stated, “The truth is that we have already dealt with it this morning.” The next day, I will meet with them to hand over funds to them.”

Meanwhile, according to sources close to the Vice President, the Second Gentleman is currently working on finding a permanent residence for the veteran actor.