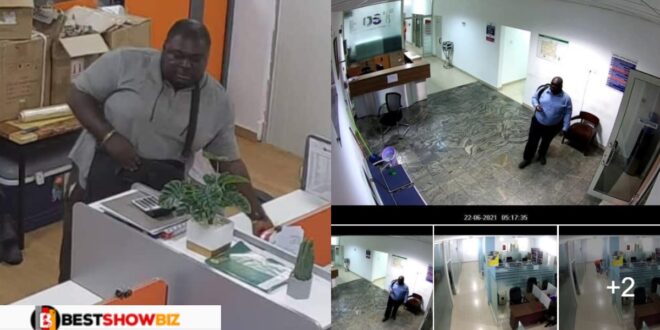 ACCRA: Police searches for a thief who entered an office and packed all their laptops after telling cleaners he was a staff member

An unidentified middle-aged man was able to boldly enter an office and remove all of the laptops that were laying around despite the fact that he was seen on surveillance video.

According to reports, he was employed by DCL Laboratory Products Ltd, a company based near the Ogbojo roundabout that specializes in the installation and maintenance of medical equipment and supplies.

He strolled into the workplace, introduced himself to the cleaners as a member of the team, gained access and then took laptops before walking out in grand style.

In an interesting twist, ClassPee Della Russel, who made the video public, later stated that the gentleman had returned all of the laptops after he had most likely seen himself posted on social media.