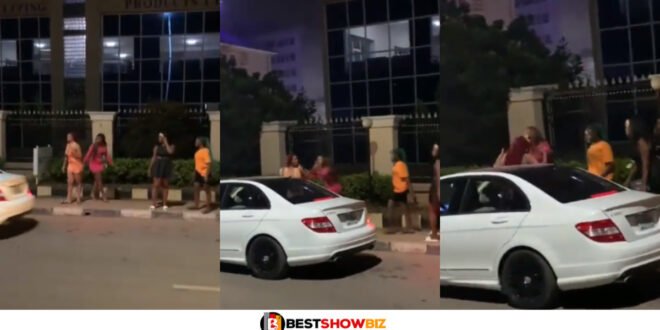 Ặshẳwo ladies exchange blows as man in Benz pulls up to seek their services. (watch Video)

Kwesi Arthur began the new year with a completely new phrase, ‘Ashawo Season,’ which is being utilized by almost everyone on the streets.

His tagline, ‘Ashawo Season,’ has been famous among social media users, with it trending at number one on the micro-blogging site, Twitter.

A Twitter user uploaded a video of three-night workers battling rough on the streets as a man driving a white Mercedes Benz stopped over to solicit their services in one of the comments under his post.

The altercation ended with one of the females being given the go-ahead to drive away with the customer.

Ashawo season we go dey everywhere, No where cool 😂😂💔 pic.twitter.com/BD53AbPrQl