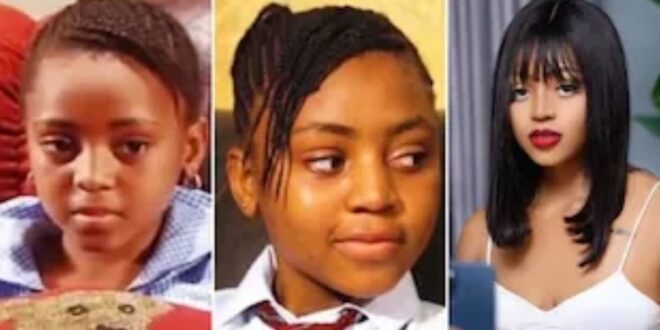 Regina Daniels shares photos from her humble beginnings to where she is now.

Regina Daniels Nwoko, a famous Nigerian film actress, is the epitome of transition, and she has used social media to show how much she has improved.

The teenage actress and mother of one took part in a viral social media competition in which participants shared old images alongside newer ones.

The actress posted images of herself as a young girl and aspiring actress, as well as recent photos of herself as a famous movie star, a mum, and the wife of a billionaire, in the brief video clip.

Regina wrote in the caption of the picture that she was confident her transformation did not hit many people as strange because she grew up like a movie star in front of their eyes.

As she puts it:

“It’s not shocking that I grew up in front of everyone’s eyes, is it?”

Regina Daniels recently posted new images on social media and addressed how much has changed in her life.

It’s no longer news that a number of fans are worried about the mother of one’s weight loss, as shown by their messages on her Facebook profile.

Regina then used her caption to make a final statement on everyone who felt she had dramatically improved. She claims that a lot has changed in her life.