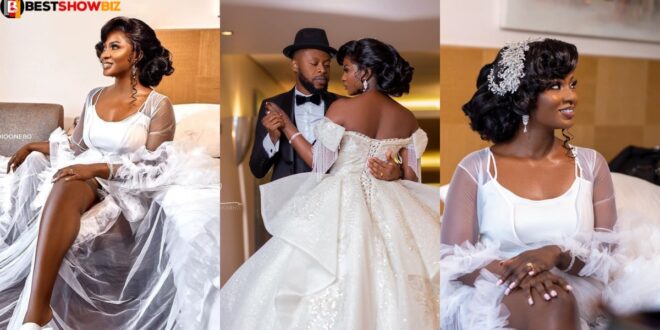 Patricia Opoku Agyemang, commonly known as Ahuofe Patri, and comic actor Richard Kweku Asante, well known as Kalybos, shocked Ghanaians and fans when they announced their engagement on social media with the caption ‘Save The Date’ – 10 – 07 – 21 “..

When we all believed it was a joke, Ahuofe Patri and Kalybos both posted stunning photographs and videos of themselves at a secret wedding ceremony, implying that they were married.

We have known the two for a few years, and we have seen how amazing their relationship has been, going out to events, filming movies, series, and tv skits together, and for a period when most people assumed they were dating.

Despite this, a series of appearances on national media from both sides denied that they are dating, resulting in them declaring their relationship “Most Ghanaians were taken aback by ‘Save The Date.’

According to Bestshowbiz.com, Priscilla and Kalybos conducted a bridal photoshoot for the ‘Rent a Dress No Stress Ghana’ campaign. A Ghanaian one-stop bridal shop that handles everything related to weddings and bridal gowns.