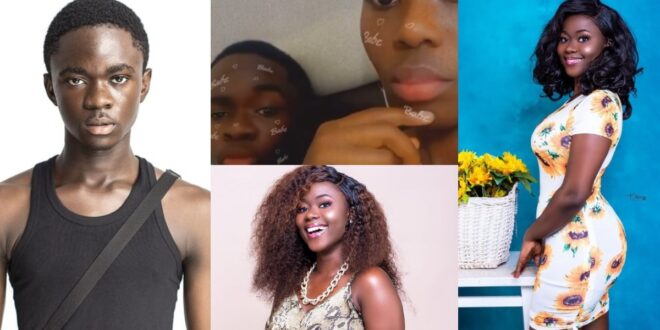 Yaw Tog’s elder sibling, Phaney,  has caused a ripple on the internet since capturing the public’s eye.
On Friday, March 12th, Phaney made an appearance in a video congratulating her younger brother, Yaw Tog, on breaking the Ghana YouTube record with the visuals of his “Sore Remix.”

Yaw Tog’s Sore Remix on YouTube had racked up over 1.3 million views in just three days, and Phaney was proud of him.

Stormzy, a stunning singer from the United Kingdom, and Kwesi Arthur, a Ghanaian award-winning artiste, were featured in the song. Following this remarkable YouTube success, Yaw Tog’s name has spread far and wide in a short period of time.

Phaney and Yaw Tog were sitting on a sofa in a living room, and she wrote “congratulations baby boo” .

Another explanation why many people assumed Phaney was Yaw Tog’s girlfriend is because she referred to the singer and rapper as her “baby boo” in her caption.

However, there is a striking similarity between Yaw Tog and Phaney, especially in their foreheads and lips.

When people began to refer to her as his girlfriend, she responded by revealing herself to be Yaw Tog’s older sister.

Check out her reaction in the video below:

Below are photos of Yaw Tog’s beautiful niece, Phaney: