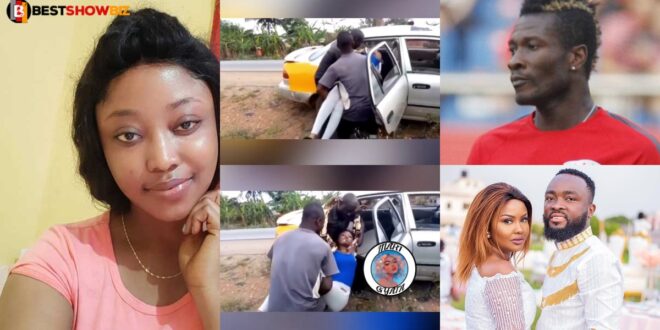 Kumawood actress Joyce Boakye tries to k!ll herself after she exposed Nana Ama and Asamoah Gyan

On social media, a video of Kumawood actress Joyce Boakye is generating a stir. With some type of deadly fluid trickling from her mouth, the actress is seen being put into a taxi.

Users on social media are shocked and concerned about what is truly going on with the controversial actress.

While some speculate that the video could be a scene from a movie, some suggest that Joyce Boakye is depressed as a result of her recent argument with Mona Gucci, which resulted in the exposure of Nana Ama McBrown and Asamoah Gyan.

Joyce Boakye and her former bestie Mona Gucci recently got into a fight over some personal matters.

They shared some screenshots about McBrown and Asamoah Gyan as part of the fight.

Joyce Boakye exposed the issues in McBrown’s marriage by releasing screenshots of a private chat she had with Nana Ama McBrown.

She also shared a second screenshot of Asamoah Gyan purportedly pleading with her to have an affair with her.

Apparently, Joyce Boakye exchanged the conversations with Mona Gucci when they were best friends, and they were leaked during their fight.

McBrown and Asamoah Gyan were humiliated by the two personalities, but they dealt with it quietly rather than creating a confrontation with them.

Joyce, according to accounts, is depressed as a result of the recent events. In a video that has gone viral on social media, she looks to have tried suicide.