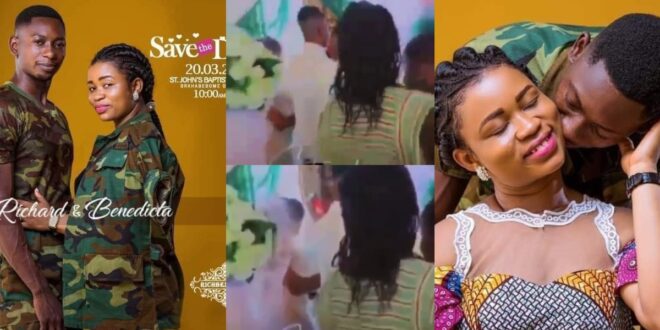 “You will d!E”- Lady heard shouting at the wedding of Richard Agu when he was walking down the aisle (video)

The wedding of military officer Richard Agu and his partner Benedicta Langtaa is currently taking place at St John’s Baptise Church in Obuasi.

Comfort Bliss, Richard Agu’s ex-girlfriend, tried to trigger a ruckus at the wedding because he supposedly dumped her because she wasted too much money on his preparation.

Richard Agu, on the other hand, was able to step up security at the wedding in order to avoid any unexpected accidents.

However, in a video that has gone viral, a wedding guest can be heard screaming at the top of her lungs, “you will die,” as Richard and Benedicta walk down the aisle.

We’re not sure who the ‘angry’ guest was referring to; the suspected curse may be aimed at the bride, her Rival, or even the groom!