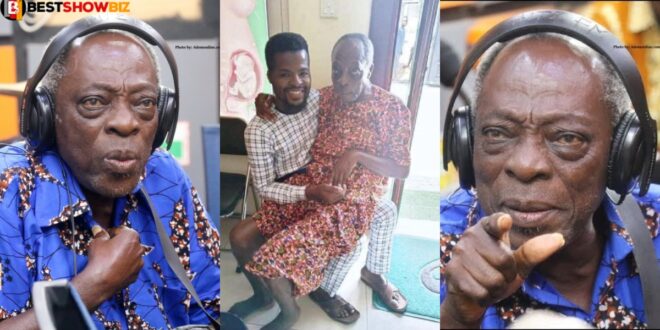 Ghanaians have been dealt a devastating blow with the demise of legendary actor Kohwe. Mr Kofi Laing, also known as Kohwe, passed away on Thursday, September 16th, 2021, in the early evening.

The residence was where Kowhe passed away, according to his daughter, Comfort Laing.

A photo of the legendary actor, who appeared to be in poor health, appeared on social media around a month ago.

Kowhe was spotted sitting on the back of a man when he was seeking medical attention at a health center.

According to accounts, Kohwe had been suffering from a stroke for a period of time before to his death.

The actor, in addition to battling for his health, was suffering from financial difficulties, and he appealed for assistance on multiple occasions prior to his death.

In one of his interviews, Kohwe asked with Ghanaians to provide him with financial assistance so that he would not have to wait until after his death before receiving a dignified funeral from family and friends.

Unfortunately for him, no one listened to his pleadings. However, according to a story circulating on social media, former President Mamaha was looking after Kohwe and providing him with financial assistance.

A video obtained by bestshowbiz.Com reveals the moment Mahama dispatched a colleague actor, Mr Beautiful, to Kohwe in order to bring a sum of money and some food items to the former president.

According to sources, Mahama generally pays a visit to Kohwe every three months, and this was the most recent of these visits.

The video depicts Kohwe’s final days before he breathed his last breath on the battlefield. Take a look at the video below.