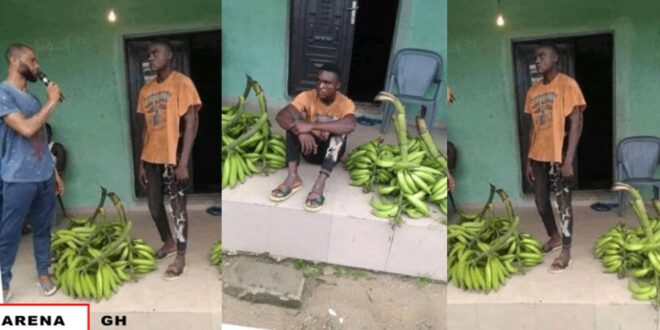 “I stole the plantain to sell and give my girlfriend to do make-ups”- Plantain Theif says after he was caught.

A Nigerian man decided to steal some plantains worth N10,000, which is equivalent to 140 Cedis, to show his undying love for his girlfriend, but he was caught.

After being apprehended, the young man admitted to stealing the plantain to sell in order to pay for his girlfriend’s make-up.

the young man stole bunches of plantain in Ebedebiri, Sagbama LGA of Bayelsa.

When asked what the money would be used for, the man said that his girlfriend had requested the money for a make-up session.

According to reports shared by community leaders on Monday, May 24, the perpetrator was apprehended and admitted to the crime during questioning by a community official. He said that his girlfriend had requested GHC140 for make-up and had given him a deadline to get the money or risk losing her.

The alleged plantain thief said he was so eager that he broke into people’s farms and harvested their plantains in order to sell them and raise money for his girlfriend. This is an example of the phrase “things we do for love.”