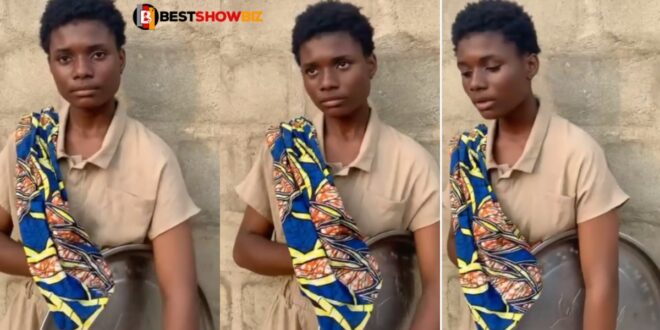 A 17-year-old street hawker named Salle’s voice captivated social media users, who could not stop themselves from being charmed by her raw, unpolished ability.

Some customers who knew she could sing approached the girl as she returned from her daily duty on the streets.

In the video, two spectators (a guy and a woman) can be heard asking the girl if her family is aware of her ability to sing like a bird, to which she responds that they are not.

They then continued to question her further about herself and challenged her to sing to whatever beat she chose for a monetary reward.

Read Also  She is 31 and mother of 2: Meet Tracy Sarkcess, the beautiful wife of Sarkodie - Photos

As soon as Salle began singing lovely songs to the beat that was being played, the customers’ only response was wow–they were completely speechless and could not find the words to express themselves.

She sang of her desire to become a celebrity but the fact that she had no one to back her up.

Anyone who heard Salle’s voice, which was captured by some of her clients and shared online by IG blogger Tunde Ednut, was sure to get goosebumps.