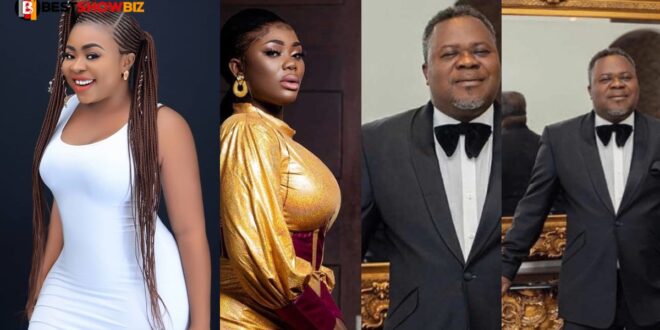 Adu Safowaa finally begs her father, Kweku Oteng for all the disgrace she has caused him (video)

Dr Kwaku Oteng has finally received an apology from Ghanaian actress and media personality Adu Safowaa, who has been publicly disgracing the business magnate on social media for months.

The Ghanaian billionaire, Dr. Kwaku Oteng, has been dragged by Adu Safowaa on a regular basis for reasons that are only known to her.

Despite the fact that we are unsure of what Dr. Oteng Oteng did to Adu Safowaa, we have watched on social media multiple instances in which she has dragged the business mogul’s name through the mud.

Some of the things Safowaa has done to Dr. Kwaku Oteng include first revealing that Dr. Oteng was the one who impregnated Tracey Boakye and is the father of her daughter, among other things.

Safowaa also revealed that Mr. Oteng is a womanizer, according to her. She claims that, with the exception of herself, he dismissed all of the ladies who appeared in the Adonko advertisement.

Safowaa, who claims that Dr. Oteng is her father, recently said that Mr. Oteng is still head over heels in love with his ex-wife, Akua GMB and that he has purchased a house and a car for her.

There have been numerous instances in which Adu Safowaa has dragged Dr. Oteng, but she has now claimed that she has repented.

As she spoke to Dr. Oteng in an interview, Sofowaa burst into tears and apologized profusely for what she had done to him.

Adu Safowaa then went on to call on Dr. Osei Kwame Despite and Dr. Ofori Sarpong, pleading with them to intervene on her behalf with Dr. Kwaku Oteng.