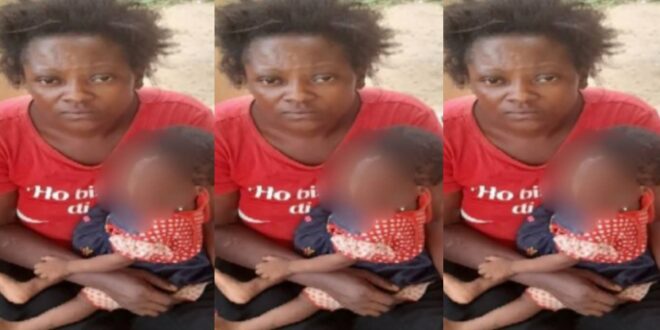 Young lady k!lls her mother because her pastor said her mother was a witch.

Blessing Jimoh, a Nigerian young lady, has been apprehended by police for allegedly murdering her mother, Ijeoma Odo.

Blessing, 30 years, is alleged to have murdered her mother with a cutlass after a priest suspected her of being a witch. She was placed on display for other prisoners. According to TheNation, the Preacher is on the run.

Blessing said that she has four children and that the crime was committed while they were working at the farm in the Ile-Iluji district. She said she was mentally ill at the time of the murder. “It was something inside of me that drove me to murder my mother.

I’m not impressed by what I’ve done. I used a cutlass to break her hair. It was a pastor who accused her of being a witch, so I went to beg her. My mother is from the state of Enugu. “We’ve been searching for the Pastor but haven’t found him,” she said.