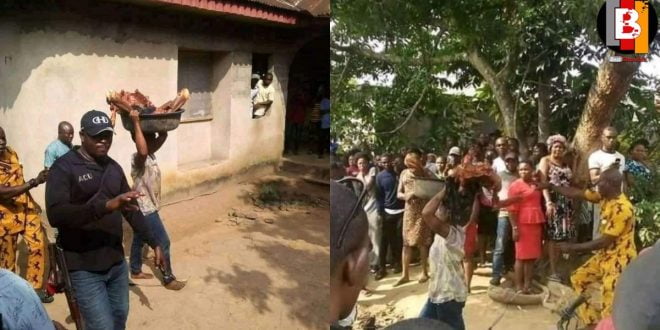 A Nigerian woman, Friday, November 27 was arrested after she reportedly killed her biological mother and chopping her body into pieces in Ikot Ekpene [a town in Akwa Ibom state].

An eyewitness, Emmanuel Umanah who first shared the horrid incident on Facebook, however, failed to give the name of the suspect but shared footage from the incident which happened at Umoh Obot road off Nto Akpan Inyang Street in Ikot Ekpene.

Some of the bizarre photos show the yet to be named woman carrying the body pieces – she had kept in her house for days – in a bowl.

Read Also  Medical doctor who was captured in a video weeping over broken heart finally speaks.

Other photos capture when the suspect was tied up and bundled into a police van ready to be taken to the station to be detained.

Meanwhile, an official report from the PRO of the Akwa Ibom State Police Command [SP Odiko Macedon], the suspect has a mental illness. Macedon added that she would be evaluated medically by Doctors before interrogation and investigation begin.

Source also claim the woman, when arrested, acted as if she did nothing; did not feel any remorse and it looked like she wasn’t aware of what she has done.