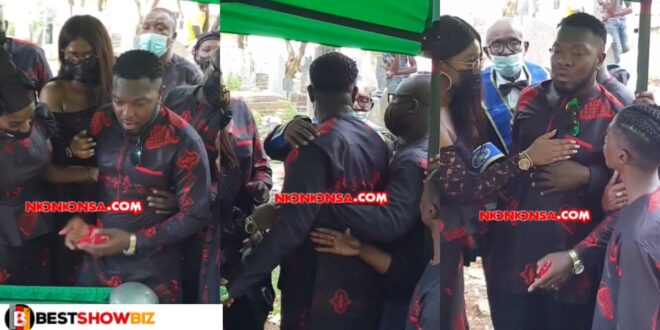 Watch Reggie Zippy’s heartbreaking video of him weeping and singing for his late mother before she is buried.

A rather sad and heartbreaking video of Ghanaian Reggie Zippy, a UK-based Ghanaian artist, singing a tribute song for his late mother before she is finally buried has surfaced online.

It will be remembered that the rapper tragically lost his mother in August of this year.

Reggie Zippy became depressed after learning of his mother’s death and shocked many social media users one day with a shocking suicide message posted online.

“When you hear that ReggieZippy is dead, please don’t cry,” Reggie wrote. I’m just having a good time in Heaven with my mother. Thank you all for your love; we love you all.”

Fortunately, nothing bad has happened to him since that terrifying post, and at his mother’s funeral today, Reggie was seen singing the tribute song he recorded for her in a very sorrowful tone.

May Madam Cecilia rest in peace.