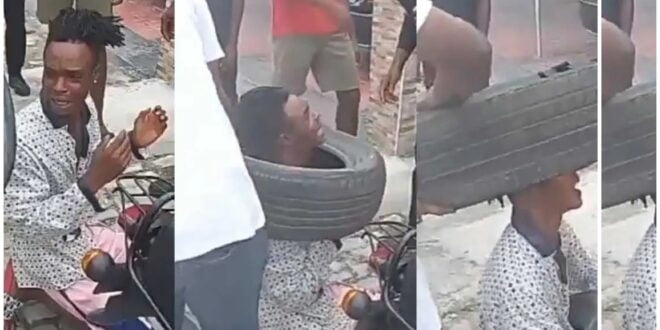 (+VIDEO) iphone thief caught after using his photo as dp on the iphone he stole.

Following his arrest for allegedly stealing an iPhone and using his photograph as the WahstApp display photo, a young man was on the approach of losing his life when he was discovered.

The video was posted on Twitter by a user known as Lemonademouth, who said that the young man had stolen his cousin’s phone but had run into trouble when he used his own picture as his WhatsApp profile picture on the phone he had stolen

According to reports, after making the careless error, he was captured and escorted to the police station, where he was warned that he would face swift and severe punishment.

Read Also  "I only have sex with boys 17 years or younger"- 35 years old woman says.

“This individual stole my cousin’s iPhone. When he chose to place his picture on the owner’s WhatsApp profile picture, his luck ran out… Is it true that no be juju be that??? “Who da fuck does that!!!” Lemonade wrote in the caption of the video.