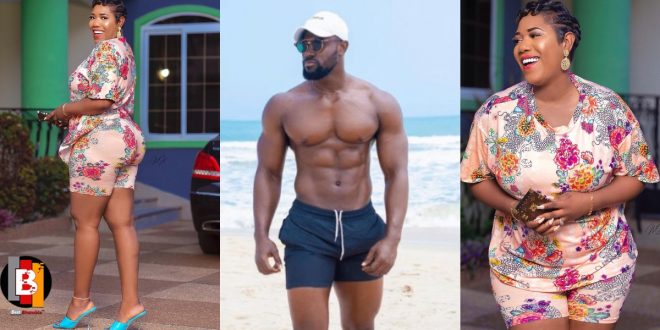 Socialite and wife of popular blogger Konkonsa, Victoria Lebene got some wild accusations from her social media fans after she shared a hot photo of her gym instructor on Instagram.

After sharing the hot photo of the handsome young man with his nice body physique, her fans accused her of sleeping with him – an assumption which was derived from the Joyce Blessing marriage issues.

However, it is certainly her caption to the photo which sparked all the controversies. “Is your personal trainer this Hot? Hot Chocolat🤪 Follow my banging body journey…..Next Post!!!,” she captioned the photo

One of her fans commented; “he dey chop p333″, a comment that got Victoria Lebene pisses off as she slam the fan with a reply; “foolish Talk! Kwasia kasa”.

Going berserk on the first user did not stop others from assuming the same as another user said; “Hmmm I fear for konkonsa … these gym trainers are 🤐🤐🤐🤐”. One naa.adjekaa also wrote; “And u lavishing over another man’s body like that, eiii”.

Victoria Lebene, due to the wild allegations coming over the picture, has taken down the photo.