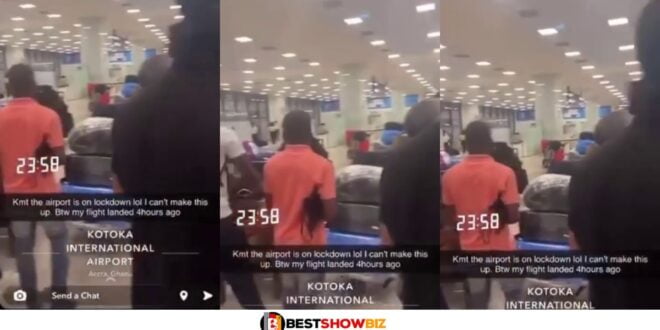 Travelers are being held at Kotoka International Airport following a bomb threat. (video)

In connection with a suspected bombing, a number of travelers who landed at Kotoka International Airport late last night were detained.

A bomb had apparently been hidden in the airport, according to the video we have seen, prompting police to limit travel and detain passengers.

A victim of the incident reported her ordeal on Snapchat, claiming that they had been detained after being informed of an impending bomb assault. As a result, the alleged bomb was however never found by the bomb squad.

Some travelers were seen running for safety as they lied on the floor in a video available to us. Some were looking for a way out, fearful of a purported bomb attempt on their lives.

It is imperative that the Ghana Police Service investigates this allegation and determines whether or not it is true.