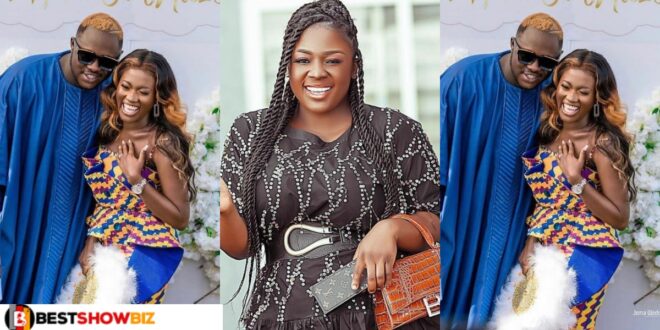 Tracey Boakye  confirmed to be deeply envious of Medikal and Fella Makafui.

Tracey Boakye has been accused of being envious of Medikal and Fella Makafui.

Social media users have chastised her for her pitiful attempt to challenge the ‘Medifella’ couple.

It all stems from some videos Tracey Boakye has recently released to showcase her properties.

Tracey has been proudly displaying the interior and exterior of her homes and referring to herself as a landlady.

She has always referred to herself as the East Legon landlady, but for whatever reason, she has recently increased the number of such posts.

Fans are fed up with her after she shared yet another post showing off her new home, and they are now accusing her of jealousy.

According to social media users, she’s only doing all of this because she’s envious of Medikal and Fella’s new home.

According to netizens, she’s only flaunting all of this to detract attention away from MediFella.

Tracey posted a video of her ‘house’ with the caption ‘owner.’

Switchfocus, a blogger, shared the video with a sarcastic caption, wondering who Tracey is competing against.

Na hwan koraaa na 33ma BB pressure for her to be posting these videos yi? Island Frimpong ohn?” he wrote.

“She is suffering paaaaa oooo,” one person wrote.

Another added: “When something is yours you needn’t prove to anybody,” Very true, and that goes for both Tracey and Medikal.

Check her video below…