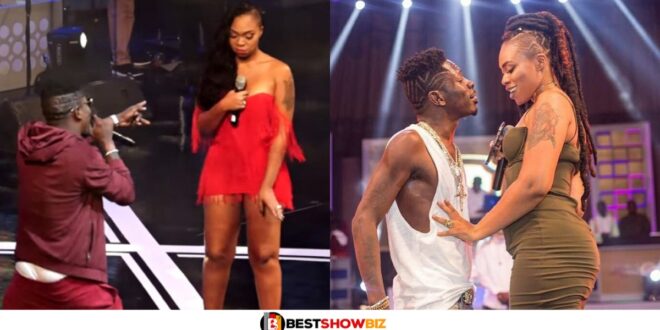 Shatta Wale has stated that he and his ex-girlfriend Michy will not be getting back together. This came after most of his follows though they were hinting a reunion from the Dancehall artist and his baby mama following a comment passed by the former.

“In fact, let’s do another song. This time I won’t pay you in kind, but in cash. Kudos to BHIM nation,”  Shatta wrote on social media after Michy’s performance at the BHIM concert.

This comment got fans speculating that the SM leader wanted to revive their romance. However, Shatta wale was quick to react to the speculations.

Shatta claims that he desires Michy’s return, but only as a business partner this time.

“It’s not like I want Michy back but I believe that people want us to do something in relation to music. We gel together and people want a feel of that so. Once in a while I talk to her although it is not often. I try to be a good dad to Majesty. We are all living our separate lives now”.

“I currently do not have a partner, I am single,” Shatta Wale added.