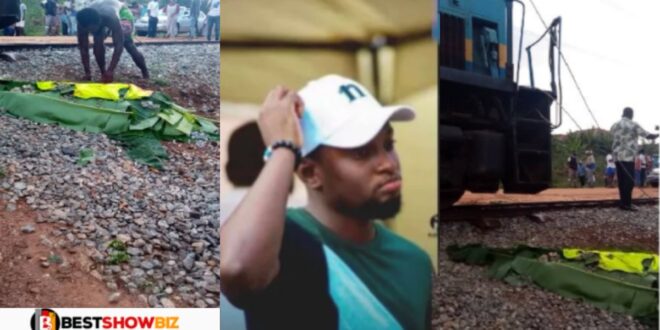 So Sad: Train runs over and k!ll Michael Asante, the Accra Area Manager Of The Ghana Railway Authority

The Ghana Line Authority’s Accra district manager, Michael Asante, was killed after a train on the Accra-Nsawam railway derailed.

According to sources, the deceased was examining the rail line with his crew on Monday, October 25, 2021, when he was tragically run over by a train.

According to eyewitnesses at the scene, when they were on the train inspecting the rail line, the manager attempted to avoid being entangled by the electric wires by jumping from the speeding train, but he was overrun by the moving train.

Micheal was believed to be unconscious following the incident, but people were not able to approach him due to an electric shock he received, which resulted in his death later on.

This happened yesterday 3pm but police came to take de body 6:30pm.
When the train run over him he was not dead n people called ECG to put the light off but they refused called ambulance they didn't come. The reason people never touch the body was electrocution. People stood…😭 pic.twitter.com/cZ9RQjbYtI