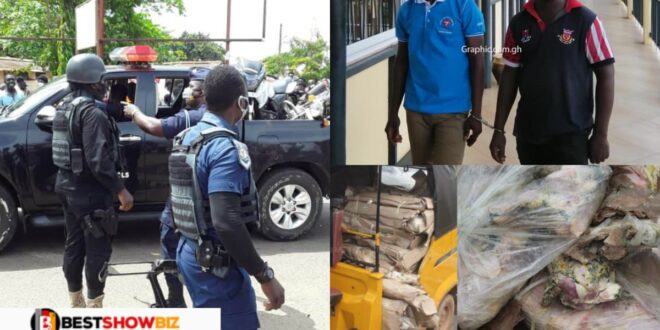 According to a recent report by the Ghana Police, two people were detained for selling wholesome chicken that was rotting and spoilt to customers who had asked for their services.

A foul odor was detected by an environmental health officer of the Kumasi Metropolitan Assembly (KMA) while going about his daily duties at the Adankwame bus terminal in Kejetia, according to reports. After further investigation, the officer discovered that the foul smell was emanating from a container of cartons of chicken, which she demanded to be inspected.

Due to the discovery of decaying meat and the realization that it should not be offered for consumption, the officer confiscated the chicken and notified authorities, who responded and arrested the two individuals who had been selling the meat.

Henrietta Afia Konadu Aboagye, the KMA’s Public Relations Officer, revealed to reporters that they have arrested one Kwadwo Asare and another person whose identity has not yet been revealed.

They have been detained in police cells while they assist in the investigation that has already begun to determine whether or not there is any more rotten meat in the market.