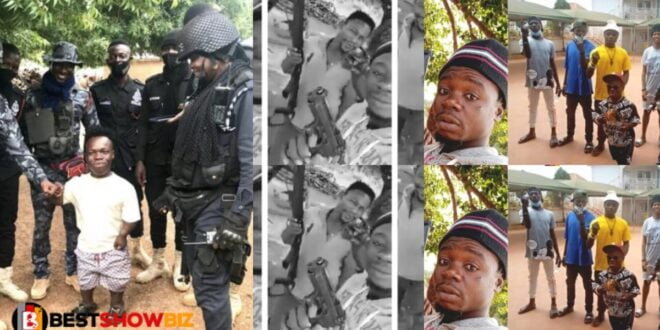 In the early hours of Tuesday, a video portraying a group of Ghanaian teenagers with firearms and a pump action pistol was published. It is unlawful for a common person to have unregistered weapons in their hands in any country.

This, along with what one of them stated at the video’s conclusion, encouraging everyone to run, enhanced the video’s popularity on social media. Following the publication of this video, additional research into the main member’s social media accounts was done, and it was revealed that he went by the name Obour Belling on Facebook.

His Facebook account was used to get further information. Images of Obour Belling holding enormous quantities of money circulated years ago. It was possible that he was an armed robber as a result of this. A stunning photo of the infamous Shatta Bundle was also posted on Obour Belling’s Facebook page. Shatta Bundle walked in front of the alleged armed people and posed for a shot in the video, prompting speculation that he may be connected to them.

If these individuals are truly armed robbers, then everyone who was seen on Obour Belling’s Facebook account, including Shatta Bundle, must be imprisoned as well. They must explain to the authorities how they got to be affiliated with these armed individuals. Another reason Shatta Bundle might be arrested is because, despite the fact that his source of income is unknown to the general public, he is routinely flashing enormous quantities of money on live Facebook broadcasts.

Nonetheless, the accused armed robbers have come forward to declare that they are not armed robbers, but rather ordinary galamsey operators who were simply casting curses on people who were sullying their name and jeopardizing their lives in that specific video.