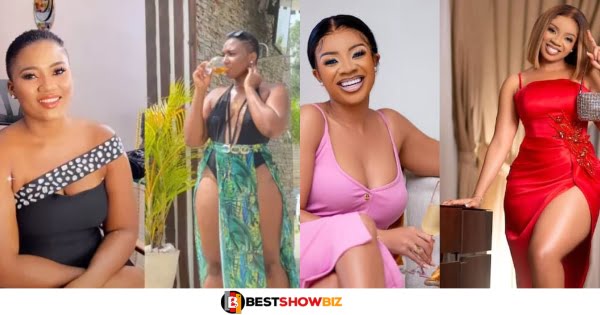 Abena Korkor has made it clear that she and well-known broadcaster Serwaa Amihere have nothing against each other, despite what most people think.

As you may know, Abena Korkor has been making derogatory remarks against the award-winning news anchor on social media for quite some time.

Serwaa Amihere was named a corporate Ashawo mastermind in her most recent attack, and she accused her of selling her body to rich men for money.

Abena Korkor claims that she only says such derogatory things about Serwaa Amihere when she has a relapse but that she does not hate her.

Serwa Amihere has dated all of the guys she has dated, so they are more like rivals in a polygamous family than haters, according to the mental health expert.

Abena Korkor agreed that Serwaa’s hard work and commitment to her media career are admirable.

Read Also  "I want a fraud boy to buy me a car, I am tired of trotro"- Abena Korkor

“It looks like the guys she has dated, I’ve dated the same guys before so people presume I have an issue with her and her sister. They are hardworking girls I admire and I can even go to them and learn from them but they feel I have issues with them” She said this in an interview with Mona Gucci on Onua TV.

In the same interview, Abena Korkor shared further details, which you can see in the video below.