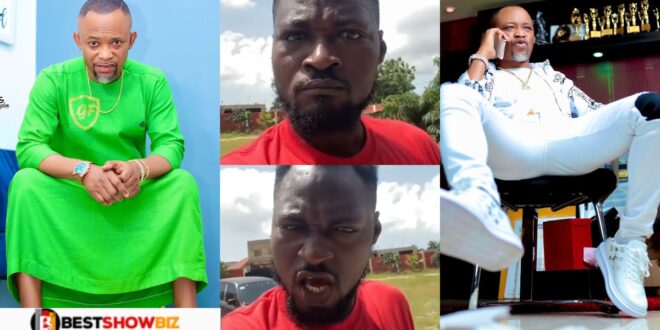 Fadda Dickson of Despite Media has finally responded to Funny Face’s unjustified attack on him, Bola Ray, and Adebayor.

The bipolar comedy actor recently posted a self-made video on the internet in which he ruthlessly abused Fada Dickson, Bola Ray, and Emmanuel Adebayor for no apparent reason.

Funny Face, who craves attention, also expressed his displeasure with Fada Dickson for allowing his baby mama’s mother to contaminate his mind about him.

He went to the extremity of insulting Fada Dickson’s mother and father, as if the terrible words he flung at her weren’t enough.

Funny Face is said to have gone to Fadda Dickson to beg for money but was refused, which is why he became enraged.

Read Also  Portia Asare Boateng: 10 Photos Of The Decent Kumawood Actress That Will Amaze You

Fadda Dickson has also responded to Funny Face’s Rambo-style attack on him, claiming that the comedic actor’s ungratefulness will not prevent him from assisting others.

He also stated that he helps not because he has a lot, but because he knows what it’s like to be poor because he was once broke.

Fadda Dickson further stated that he will continue to be a philanthropist because it is a kingdom value to give.

When I GIVE, it does not come with STRINGS.
I’m not keeping TRACK of it as what you OWE me.

When I GIVE, I choose to do so without ULTERIOR motives. I GIVE because I know what it’s like to be without. To long for and be ignored. To speak and not be heard; to care for and have nothing returned.

When I GIVE, it’s because I know the value in what I have in my heart .

I refuse to let the world STOP me from sharing.

GIVEN IS A MATTER OF THE HEART AND A KINGDOM PRINCIPLE.