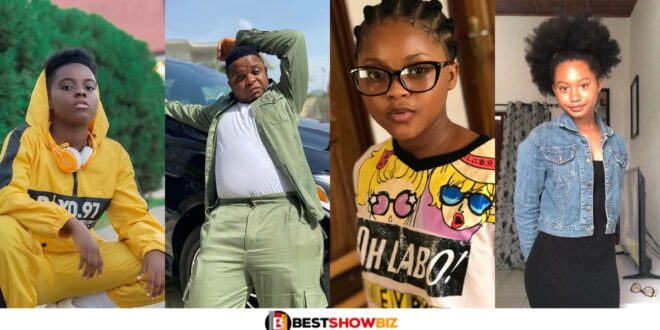 See List Of Kids Who Went To Talented Kids Show And Are Still Relevant Today. (photos)

Talented Kids debuted in Ghana in 2010, and fans couldn’t get enough of it after the first season. It’s an exciting show to see, and it’s fun to sit back and watch these kids work.

This show was made to show off the hidden abilities of children around the country. They have been a major power in entertainment as well as identifying and nurturing talent.

However, some of these contenders have managed to keep their fame for a long period.

. She has remained relevant and has received numerous ambassadorial partnerships and honors. She has launched her own charity, the Dj Switch Foundation

Read Also  Video: "I caught my mother and brother having s3x, they stabbed me with a knife fearing I will expose them"- lady (video)

” What a bombshell, ” as he calls himself, and he’s a natural comedy actor. Enoch is currently in Nigeria, where he is filming a handful of sequences on a daily basis. He’s developed into the comedian we all hoped he’d be.

Her self-assurance has prepared the road for her. This young lady is a TV host and a co-host of a show featuring brilliant children. She’s becoming bigger every day’

This adorable angel was crowned the winner of Season 10 of the show. She’s a poet, a writer, and a voice actor. She’s doing a fantastic job with the platform she’s been given on the show