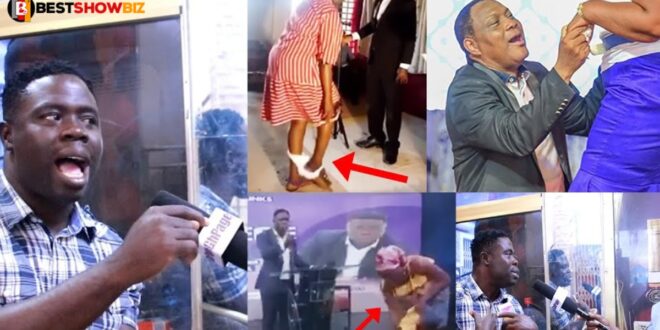 Pastor Blinks has gone to extremes in his most recent controversial video, which may be seen here.

The video shows two women delivering testimony in a church while clad half-naked in front of him, according to an excerpt from the video.

In the video, Pastor Blinks was addressing the congregation, and one of the two ladies was only wearing a bikini to the service.

Other women emerged from nowhere to scale the platform and remove their panties, all in the course of the same video.

GhpageTV went out to the Pastor to get him to explain why he makes these videos in the first place.

He explained that he does this in order to reveal some of the odd scenarios that people find themselves in while seeking salvation.

He has unexpectedly stated in the most recent interview with the controversial preacher that the Apostle General of the Royal House Chapel International, Rev Sam Korankye Ankrah, forced his girlfriend to remove her beads while they were attending church.

Pastor Blinks revealed that his girlfriend told him about the behavior of a well-known man of God in his church, and that he was shocked.

When the Ghanaian man of God/actor remarked that his wife told him that she had attended the Royal House Chapel International and was requested to remove her beads, he didn’t hesitate to mention how surprised he was.

She and the other women who had gathered in the chapel to seek liberation from evil spirits were instructed to go to the lavatory and remove their waist beads.

Watch the entire video below;