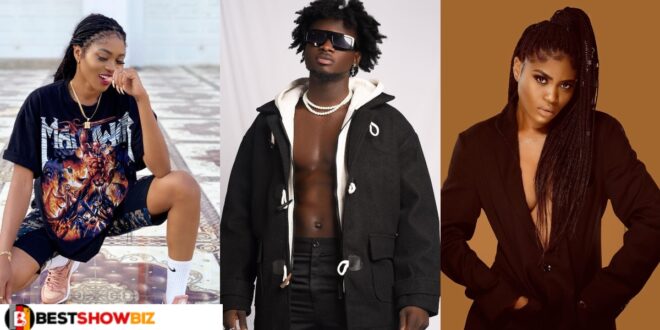 Kuami Eugene, a Ghanaian singer and Lynx Entertainment signee, was roasted by netizens yesterday after declaring categorically that he will never work with Ghanaian rapper and songstress Eazzy.

the ‘Angela’ hitmaker in a new interview with DJ Slim on Radio One 105.7, stated unequivocally that if an industry colleague sends him a song for collaboration and there is nothing she can do about it, he will sit unconcerned.

Netizens pounced on DJ Slim after the interview went viral, with many describing him as arrogant and selfish.

Many people criticized him, but others pointed out that Eazzy stated unequivocally in 2019 that she will never collaborate on a song with Kuai Eugene and Patapaa.

Eazzy was asked to name three Ghanaian artists she will never collaborate with in an interview with Lexis Bill on Joy FM’s Behind The Fame segment.

She revealed that based on Patapaa’s line of music, she would never want to collaborate with him because it is strange, even though it fits him.

Her next artist is Kuami Eugene, but she prefers KiDi because he fits her line of music better.

It appears that her own words have come back to bite her.