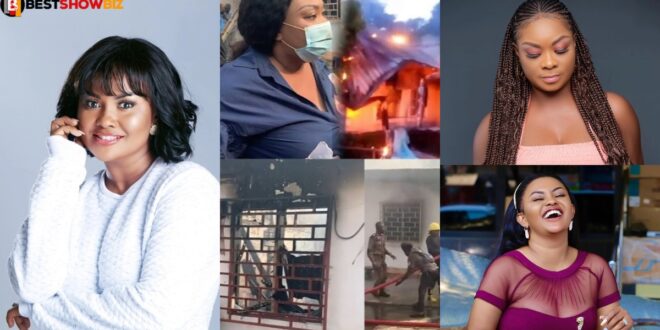 Nana Ama McBrown, a veteran Ghanaian actress, has come under fire for soliciting cash for Beverly Afaglo on her official social media platforms.

Nana Ama McBrown has published a new video pleading with her fans to help Beverly Afaglo, a colleague actress who recently lost her home to fire.

According to McBrown, Ghanaians should help Beverly Afaglo build a new home for herself and her children by donating Momo or any other sum they can afford.

She revealed that she had asked the actress’s management for permission to gather funds on her behalf.

Social media users, on the other hand, have slammed her and called her names.

Many of her followers are upset that the actress will seek Ghanaians for money to support Beverly Afaglo while superstars like her do nothing to help regular Ghanaians.

Fans of Nana Ama Mcbrown came to social media to inform her about a recent incident at Makorla Market, but no celebrity was worried.

Shops were set ablaze, individuals lost their jobs, their source of income, their capital, and their businesses, but none of Ghana’s celebrities came out in support of those people, despite the fact that when it comes to a celebrity, everyone rushes to Ghanaians to help with their meager wages.

She claims she has lost everything she possesses. Actress Beverly Afaglo confessed in treas that she is absolutely destroyed and has no idea where to begin.

Following that, her management has presented certain figures in an attempt to raise funds for her. Actress Yvonne Nelson has also set up a GoFundMe page to seek $20,000 to help her.

Read Also  "Come back and k!ll those who k!lled you" family of Leticia buries her with a cutlass and eggs (video)

Even though Nana Ama McBrown is in Germany for surgery, she is busy soliciting assistance for Afaglo.