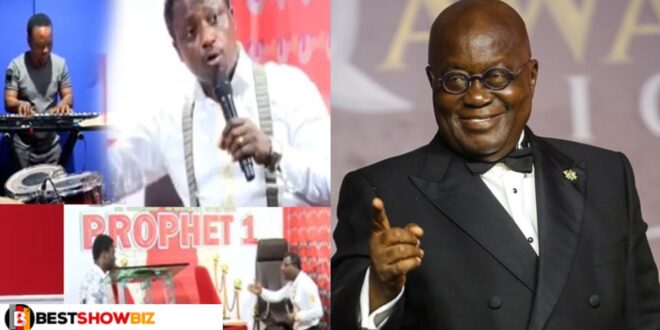 During one of his live sermons on his privately-owned TV station, self-styled Nation prophet Rev. Opambour reacted to the suicidal 2022 budget.

According to Rev. Opambour, the government’s decision to scrap the money collected at various toll booths and transfer it via electronic money transactions defies logic.

Prophet 1 dropped a short freestyle for Nana Addo about the current hardships in the country while preaching on his P1 TV station. Prophet 1 has very strong opinions and refuses to accept that they may be wrong.

His song bemoaned how poor people would be the ones to bear the brunt of the controversial E-levy, which he viewed as an insensitive move on the part of the Akufo Addo-led National Democratic Congress (NDC).

Sublime hotshots were thrown at Nana Addo and the finance minister in the freestyle, accusing them of making Ghana Hell on Earth.