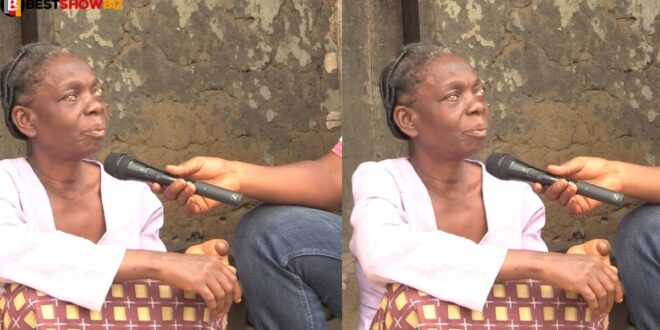 Portia Essa, a physically challenged woman who was blinded by her sisters, spoke with DJ Nyame of SVTV about her tragic incident.

DJ Nyame and the SVTV crew are currently in the Central Region, in the town of 3hw3 Saakyi, where they learned about Madam Essa’s tragedy.

Madam Essa claimed that when her father moved to Saakyi in quest of land and work, he died. Her father’s work, from which they were surviving, was taken away from them following his death, she claims.

Madam Portia Essa said that she had other siblings, that she visited one who had given a baby to take care of the infant, and that a wealthy guy in the neighborhood agreed to marry her after she became blind at the age of 13.

Her sisters, she claims, used her as a topic after hearing that a man had promised her marriage and were telling everyone about it, particularly their in-laws.

Madam Essa explained that there are lesser gods in their family and that she believes her sisters reported her to the gods, causing her to go blind as a result.

She stated that she can survive on her own, but that she will want assistance from others when it comes to water and food.

Apart from food and drink, Madam Essa mentioned that she suffers from pains in her wrist and other body parts as a result of the active work she undertakes.

Madam Essa was given sacks of rice, drinks, and other valuable stuff by DJ Nyame and the SVTV Africa charity.