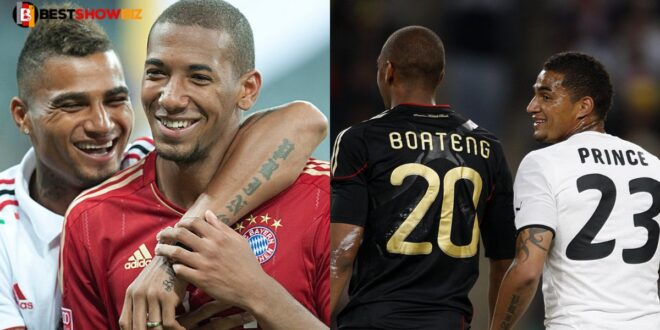 Kevin-Prince Boateng rejects his brother Jerome after he appeared in court for domestic violence against his ex-girlfriend.

In an interview, the former Ghana international player stated that he has long distanced himself from his brother and does not want to see or hear about him.

After Jerome Boateng was convicted of beating his ex-girlfriend.

And even if it’s his half-brother Jerome Boateng, KP Boateng says he respects German rules and doesn’t want to be associated with anyone who commits

“I’ve distanced myself from Jerome for a long time,” he told a German outlet.

“I respect German law. I despise female violence. I don’t agree with my brother’s activities, therefore I cut ties.”

He allegedly threw a lamp and a small cooling box at his ex-partner.

In response to the prosecution’s charges, he was fined 1.8 million euros (£1.5m).

Three years ago, Sherin, the mother of Boateng’s twin girls, accused him of several assaults, which he denied.

Sherin told a Munich judge that Jerome hit her, forcing her to lose her breath, during a vacation fight.

“His thumb grabbed my eye. He ripped my hair and bit my skull. In court, she said he spat blood on her face after opening his lip.

Affirming that his former girlfriend was exaggerating, he originally disputed the charges.

He admitted in court on Thursday that he and his girlfriend got into a fight while on vacation in the Caribbean, but she began it.

“She became aggressive and insulting, hitting him and injuring his lip,” claimed Jerome Boateng on the BBC.

“She fell when he tried to push her away. He stated he threw a pillow against a table, knocking the light over.