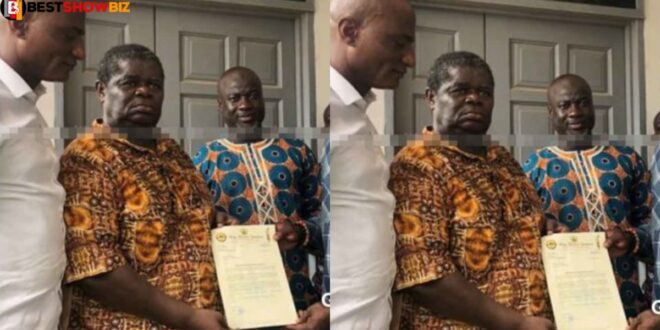 Psalm Adjetefio, an actor, is currently living the dream; his life has been drastically transformed in just three days thanks to the intervention of a mysterious stranger.

Recently, he was broke and on the edge of becoming homeless since he didn’t know where he would find food to eat the next day.

In today’s world, he has secured his rent for the next five years, he has received Ghc 20,000 in kind from Bawumia, and a house is on its way, according to a promise from Rev. Obofour, and has chop money to spend.

Not to mention, the Greater Accra Regional Minister recently presented him with a Ghc 60,000 cash payment.

Overall, the man has achieved the lifestyle that most Ghanaians can only imagine – and all he had to do was beg and become well-known to do it.

In a recent donation to Psalm Adjetefio nicknamed ‘TT’ from Taxi Driver, Henry Quartey, the Greater Accra Regional Minister, became the latest to do so.

The lawmaker has directed that Ghc 1,500 be deducted from his salary each month from now until the end of the current Parliamentary session to be donated to the sick actor.

Psalm Adjetefio has been guaranteed a total of Ghc 60,000 in the 40 months remaining till January 2025.

A photo of Psalm holding up a document from the Minister approving the relocation has gone viral on the internet, according to reports.