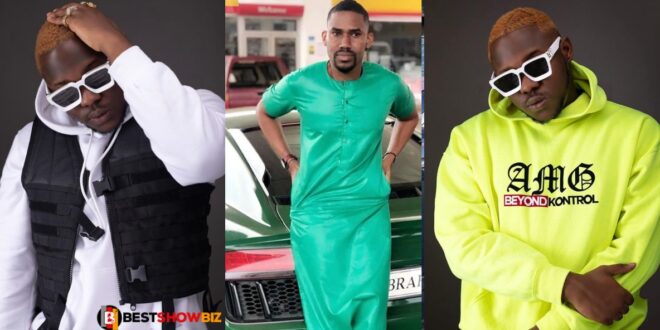 Ibrah One, a socialite, claims that AMG Medikal, a self-proclaimed wealthy rapper, was hiding from him on a plane because he couldn’t afford business class.

Medikal has always boasted about his wealth, but based on what Ibrah One wrote, it’s clear that money isn’t flowing as freely as it once did, and as a result, he can’t afford to fly business class like he used to, and was hiding from him on the plane.

According to Ibrah One, he boarded the same flight as Medikal and caught him trying to hide his face behind a cap because he couldn’t afford business class but has been constantly bragging and shouting about being affluent.

Ibrah One went on to say that all of Ghana’s best male musicians are into yahoo, yahoo because the music stopped paying a long time ago, even before Covid-19 ruined everything, and they aren’t getting the money they used to get.

There’s nothing wrong with someone who doesn’t fly business class, but for someone like Medikal, who has been flaunting his wealth and boasting about his wealth, a flying business class shouldn’t be difficult.

Ibrah One is known for saying whatever he wants, but these assertions can’t be verified. However, even if Medikal is wealthy, there’s nothing wrong with him boarding a business class trip.