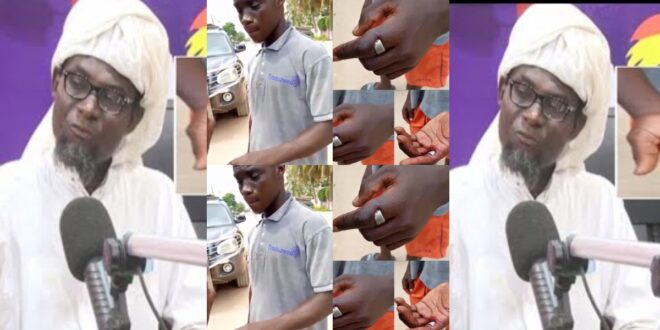 Sheikh Jibril, the Spiritual Mallam who assisted in the removal of the ring from the accused Sakawa boy’s finger, has spoken out about the procedure.
If you remember, Emmanuel Otabil of Iron City in Kasoa went viral after revealing that the ring that seemed to be “eating” up his finger had been removed.

He admitted that the ring’s owner had told him that he needed the blood of a newborn baby to remove the ring otherwise he would lose his finger.

However, according to Emmanuel, a strong mallam came to his aid and performed certain rituals that finally removed the ring from his finger; however, he did not specify which rituals were performed.

Sheikh Jibril, the Mystical Mallam who removed Emmanuel’s ring, has spoken out about how he helped him get rid of the ring that was chewing up his finger in an interview with Kofi Adoma on Angel FM.

Sheikh Jibril has detailed the mystical processes he put the young man through to extract the seal, debunking claims that he requested a baby’s blood for rituals.

Sheikh Jibril also revealed that he had taken Ghc170 from the young boy’s family and asked them to repay him with whatever they want and planned to give him in return for his help.

Mallam was only given Ghc170, according to the young boy’s mother.

The Mystic Mallam refused to say whether or not the ring was a Sakawa ring, but did say that it held a demon that could destroy him if it wasn’t extracted immediately.