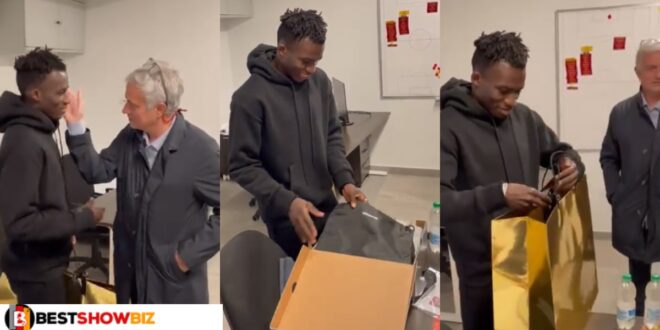 Jose Mourinho, manager of AS Roma, has kept his promise to youngster Felix Afena-Gyan after their Serie A match against Genoa.

The Special One has promised to buy a new pair of sneakers for the Ghanaian prodigy if he scores against Genoa.

Indeed, Afena-Gyan came off the bench to score twice as Roma defeated Genoa away from home to move up to fifth in the Serie A league table.

Mourinho had spoken to reporters about the situation, saying, “I had promised to buy Felix the sneakers he really likes, which are really expensive.” They cost €800, so he dashed over to remind me not to forget! The first thing I do tomorrow morning is go out and buy him the shoes.”

In a new video, Mourinho is seen handing over the package to an emotional Afena-Gyan, who received it with a smile on his face and then performed a celebratory dance.