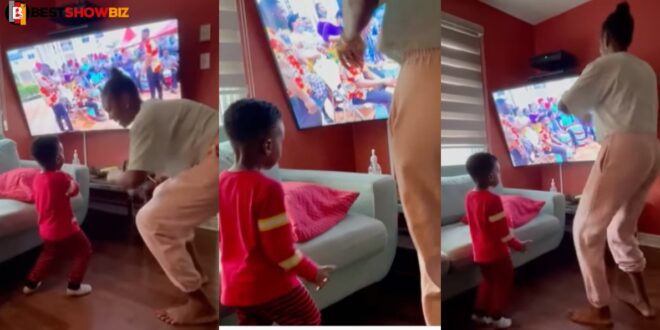 Dumelo Jr. John Dumelo, the son of prominent Ghanaian actor and politician John Dumelo, appears to be learning and carrying on his father’s legacy.

The young champion in a new video was shown spotted displaying his incredible “borborbor” dancing abilities.

The ‘Borborbor’ dance is a beautiful traditional dance from the Volta region, where he comes from and where his ancestors originated.

Junior Dumelo performed the dance by bending down and rolling his hands, which he did not just well but also humorously.

Despite his young age, the small kid who has recently begun Kindergarten (KG) in the United States was able to display these exceptional dance talents.

Read Also  "I Have 77 Tattoos And 30 Piercings" – Musician With Both kot! And 3tw3 Reveals