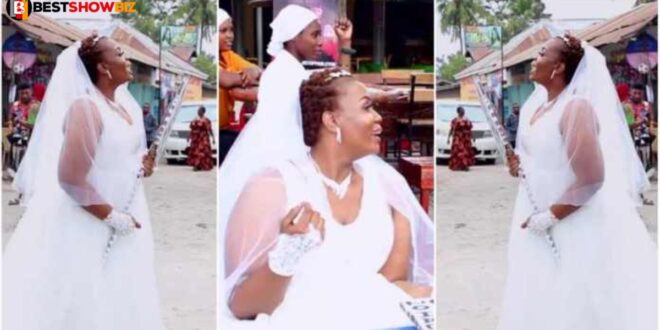 A desperate woman has resorted to the streets in search of a husband, claiming that her age is working against her.

On YouTube, the woman can be seen holding a poster in Buza, Dar es Salaam (Tanzania), which describes the type of man she is seeking and where she is looking for him.

According to the placard, “I am looking for a husband between the ages of 20 and 70.”

During an interview with a Tanzanian YouTuber, the woman stated that she would pay her dowry and that she was still a virgin.

In fact, I’ve brought the wedding rings with me. I will pay for the dowry and even purchase a suit for the gentleman who comes up first.

A woman dressed in a bridal gown expressed her willingness to convert to Islam, saying, “I am a Christian, but I have no reservations about converting to Islam as long as the man is polite and God-fearing.”

She emphasized that she is financially secure and is only looking for a partner who will adore her for who she truly is. “I have money, and I don’t want to put a man through stress,” she explained.

The lady went on to say that Wednesday, September 15, was her fourth day out on the streets looking for a partner in her endeavor. “I have met several men who have expressed an interest in meeting me at the guest home, but I have turned them down,” she explained.

She now intends to travel around several neighborhoods in and around Dar es Salaam in search of a husband.