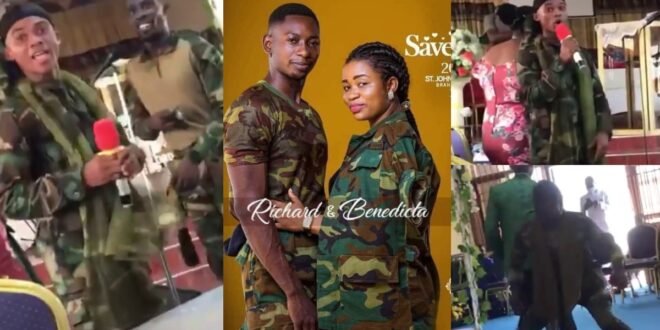 First photos and videos from Richard Agu’s wedding, Heavy military presence there to protect the event

Comfort has insulted the Military man, saying she would come over and recover the money she spent in him before he joined the army and dumped her for another woman.

As is customary in the military, some of Richard Agu’s friends have prepared themselves with high morale to punish anyone who wants to screw up the video.

Read Also  "I will be happy if Comfort Gets her Ghc 30,000 back from Richard Agu"- Bridget Otoo

Some military friends were seen rehearsing in the church grounds in a video suspected to have been taken from the location, and images showed a couple coming in while waiting for others.

Check out the images below: